Exploring Themes of Wilderness and Industry Through Images of the Adirondacks

Picturing the Adirondacks is a project centered around images depicting the Adirondack Park Region of New York State. The images represented in the map are obtained from the Digital Public Library of America, an archive that provides public access to digitized pictures and documents. The images pulled to create this data-set were tagged "Adirondacks" in the DPLA database.
This map visually represents the photographs taken of various locations throughout the Adirondack Park that have been tagged as "Adirondacks". Through this visualization, it is clear that the DPLA has access to photographs of some areas of the Adirondacks more than others. Places such as Long Lake and Lake Placid have 87 and 27 entries respectively, but other towns such as Wilmington and Minerva each have only 4 mapped entries. The locations with more entries tend to be those in the High Peaks region of the Adirondacks, or in popular vacation towns such as Lake George. The locations that seem to have the most documentation and the tag of "Adirondacks" are those that tend to appeal most to tourists. Understanding where this trend comes from requires some context. 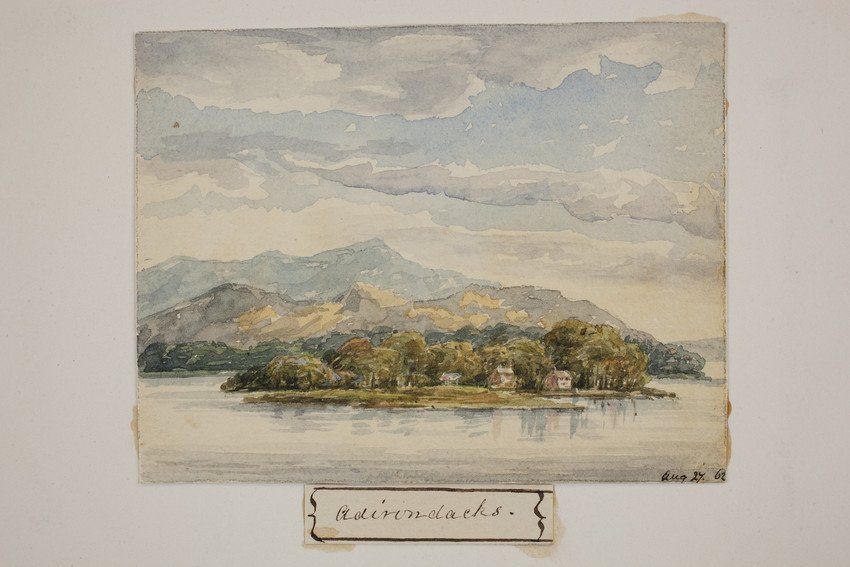 The Adirondack Park is widely regarded as a beautiful place to escape the urban lifestyle of the east coast. Within the park, there are around 2.5 million acres of publicly owned land that is free for the enjoyment of hikers, fishermen, rock-climbers, and anyone else who wishes to wander into the woods. 1 This region was not always protected, though, nor was it always viewed as a stunning vacation spot. The images presented in this map are part of a complicated history of hardship, development, and class-motivated conflict over the fate of the Adirondack Park.

The tail end of the eighteenth century saw more and more settlers attempt to make their life in the Adirondacks. The first areas that saw a good deal of growth were the Lake Champlain and Lake George regions. Still, though the population was incredibly thin. 2 Eventually, communities were built up throughout the High Peaks region. Though many were discouraged by the hardships of farming in a climate with such harsh winters and short summers, others continued to trudge on, motivated by a desire to fulfill the American Dream.3

The Adirondack region was subject to great reflection in awe during the period of American Romanticism, which lasted from the early 1800’s to around 1840. Tourists and artists alike were enraptured with the sublime views and stunning scenery of the wilderness.4

The perception of the Adirondacks during this time was largely due to a shifting idea of “wilderness” in the American consciousness. When first arriving in Massachusetts, English settlers feared the wilderness and believed it to be something that must be conquered as a way of achieving civilized society. According to Phillip G. Terrie, author of Contested Terrain, “The absence of a familiar landscape of farms and villages was alienating and frightening, and the English set out to eliminate both the wilderness and its native inhabitants.”5(54) However, tourists coming to the central Adirondacks from the urban areas of the east coast began to view the wilderness as symbol of national pride and American values. 6

The Adirondack Park was established in 1892. A mix of private and state land, for some the park was a gorgeous summer retreat and, for others, a home in which one could barely scrape by. This growing class divide in the Adirondack Park was the start of a continuing struggle. Wealthy tourists travel to the forests to camp and get away from their fast-paced urban lifestyle, while companies devour the natural resources. Those living in the park year-round often relied on these companies, which were often killing the natural beauty of the Adirondacks, to provide jobs and maintain the local economy. 7

These conflicts continued far into the 20th Century. The 1960’s saw a tourism boom in the Adirondacks, as American culture once again shifted towards a deep appreciation for nature. 8 The increase in tourism led to a need for improved infrastructure. The Park was still far behind the rest of the state as far as development went, but increased development caused conservationists to worry over the state of the Adirondacks. 9 In 1968, Governor Rockefeller appointed a group of people to begin examining the development, but this action received backlash due to the belief that “the Commission was stacked to reflect the views of wealthy conservationists and that input from ordinary, working class Adirondackers was not invited. 10 Though the locals believed that plans made by this commission would only hurt them, this was not necessarily the case. According to Terrie, “the oversimplified story of rich-versus-poor also failed to note that virtually all of the land in the Resource management classification, the land most restricted by the Private Land Plan, was owned by corporations, clubs, and wealthy families with bases outside the blue line” 11. Realistically, the ones who would be most affected by changes would be the rich who were exploiting the Park’s resources.

The emphasis placed on tourism and conservations when discussing the Adirondack park is represented in the following word cloud.

The corpus from which this cloud was developed was a compilation of all descriptive text (such as subject, description,and additional notes) that appeared in the DPLA along with the image. Most of the cloud is made up of placenames. Other words appearing, though, are "camping," ""conservation," and "reforestation." Based on this text, it appears that the majority of the pictures make no mention of the region's industrial history. A search of specific town names and industries through the DPLA might bring up many more images of paper mills and iron mines. It is possible that these images are not tagged "Adirondacks"due to the fact that they do not represent the common public perception ofthe Adirondacks.

The 1980 Olympic Games, held in Lake Placid, New York, marked a relatively momentous event in United States Cold War history – the United States victory over the Soviet hockey team. This victory has been widely celebrated – such as through Gavin O’Connor’s 2004 film, Miracle, I but few, besides those who lived through it, are aware of the toll the 1980 Olympics took on the community. Poorly equipped to handle the mass influx of spectators, the towns of Lake Placid and Wilmington dealt with increased levels of pollution from garbage produced by Whiteface Mountain. In addition to this, though the new sports facilities were great for the future winter sports fanatics, many of the structures were not built in compliance with Adirondack Park conservation legislature. These challenges once again highlight the on-going battle of trying to find a balance between keeping the Park “forever wild” and maintaining the local economy. 12

These conflicts continue today, and it is unlikely they will ever be truly resolved. However, there are changes that could be made that might begin to smooth out relations between the local populations and the Adirondack Park Association. According to Gary A. Randorf, author of The Adirondacks: Wild Island of Hope, “Local government must play a greater role in land-use planning and control functions in the park, at least where private lands are concerned…The state must provide more and consistent financial and technical assistance to local governments. Local government officials need to broaden their views beyond their own political jurisdiction…and be willing to help formulate and support local land-use plans that truly balance environmental and park protection with community and economic development.” 13 If local government is willing to make changes and state government is willing to listen to the region’s residents, compromise, which benefits both the park and its people, is possible.

The images presented in this map are more than just beautiful pictures of a prime vacation destination. Instead, each of them tells a story about a place that has been heaven to some and home to many. Looking through these pictures, it is easy to become caught up in the beauty of nature. It is important, though, to understand the complicated history of the American idea of “wilderness” and how these changing perceptions of the natural world can impact those who live in these regions.